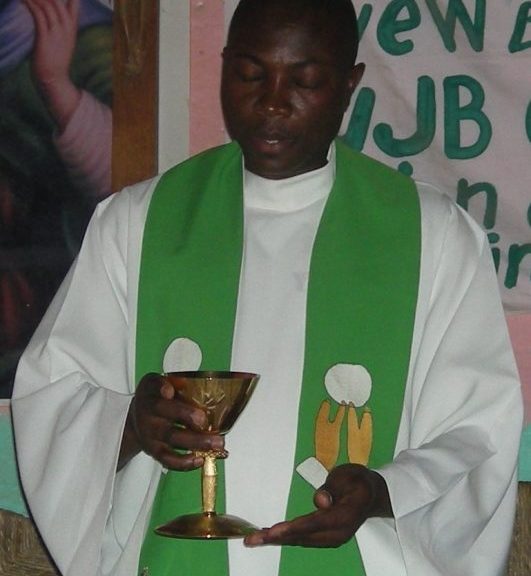 During this visit it became clearer just how big our sister parish was. Not only in geographic size but also in remoteness and the number of chapel schools, teachers and students. As the team approached the village of Bassin Medor they were driving in the riverbed and standing in the sunshine as they came around a bend in the river was Father Antonio standing in the middle of the river in full vestments with the sunlight glittering off the water all around him as he performed a baptism reminiscent of John the Baptist.

The village was crowded with hundreds of people. All around were students, teachers, administrators, sacristans and people from all around the area. The awe and strangeness experienced during the first visit was less. The team had more opportunity to visit with Father Antonio and the teachers and the students. That week was filled with food, singing, fellowship, worship, and talking about the vision that Fr. Antonio had for education through the chapel schools. We began to understand a little better the raw conditions under which education in our sister parish was occurring.

The chapel schools were at best shared spaces in the chapels themselves and at worst a lean-to shack sometimes with nothing more that sticks for walls. We began to consider that what was needed was school supplies as well as funding for the teachers. Father Antonio also told us about his desire to start up Radio Ave Maria, an FM radio station based in the village of Ducrabon, roughly 10 miles from Bassin Medor. We knew that our approach to raising funds needed to expand!

We organized the first of what would be several Eastern Iowa Haiti Sister Parish meetings and as a result St. Mary’s in Vinton learned of our work and in November of 2004 asked to join our relationship. Now we had partners in Iowa to help us and together we our first Lenten Alms fundraiser in 2005 and our first Fall Fundraiser in 2007. Our financial support to Notre Dame de Lourdes grew to almost $30,000 per year. On Saturday, March 17th, 2007 as we sat at supper in Bassin Medor we listened to the first broadcast of Radio Ave Maria. We organized our fist Sea-Crate shipment of 12 boxes in 2008 as a way to deliver the school supplies we collect during the Fall Fundraiser.

August 3rd, 2008 we learned of Father Antonio’s passing. After all we had done with Fr. Antonio this was a very heartbreaking news to hear. But God provides and heals all. December 9th, we received the news that Father Jean Bellission Jecrois would be the new pastor in Notre Dame de Lourdes.

This is where you all come in.  Our mission in Haiti is EDUCATION – particularly helping improve teacher salaries.  If we have teachers, the communities will have schools.  The children will have role models that make a difference in their lives.  They will see teachers as persons to emulate and will want to become teachers themselves.  And with adequate pay for their work, teachers can make a better living and provide for their families.